How Do Postmates and Doordash Ratings work?

The Ultimate Guide on Postmates and Doordash Rating System

What is a Rating System in the age of the Gig Economy?

The ratings are a sort of customer report and review of their experience, in this case with the delivery. The intent of rating systems is to help the growth by rewarding good actions and penalizing the not so good ones.

How Do Doordash Driver Ratings Work

It is really important that you understand how the ratings system works. Doordash customers can provide feedback after every delivery. Door dash calculates your driver rating as the average of the ratings you’ve received for your last 100 rides.

The algorithm of the Doordash rating system is a combination of the following elements:

Doordash customers are able to rate their delivery driver and the restaurant. The Doorsah Customer Rating is measured on a five-point scale (with 1 being “very dissatisfied” and 5 representing “very satisfied).

Doordash keeps statistics on your acceptance. DoorDash notes that an extremely low Acceptance Rate may be an indicator of fraud. It's written in the Doordash Deactivation Policy you sign when you become a Dasher. You can be deactivated for lack of acceptance.

When it comes to deliveries, a completion rate refers to the number of completed deliveries divided by the number of deliveries accepted. Both the Postmates Fleet App and the Dasher App give drivers the option to cancel an accepted order.

This practice is not much appreciated neither by Postmates nor by Doordash because it causes poor experience for both customers and the company.

Remember that to avoid a bad experience or a bad rate in the case of Doordash, you have to use this feature only if you absolutely need to. Postmates and Doordash drivers are contractors very similar to others delivery drivers (Favor, Waitr and GoPuff). You can go offline whenever you want.

Doordash has an 'on time requirements' based on Google Maps' estimate. A lot of drivers stress about this for justified reasons:

DoorDash Driver App allows drivers to sign up for deliveries. So, DoorDash drivers have access to strategic scheduling. Scheduling yourself for a DoorDash shift is a great opportunity to receive more orders and potentially higher earnings. We suggest you to take a look at our guide to maximize DoorDash earnings.

How Can I Improve My Doordash Ratings?

Delivering for Doordash and having a rating below 4.7 is a problem. You’re at serious risk of deactivation. The good news is it’s not hard to improve a rating if you’re doing everything right.

Your rating is based on your last 100 rated deliveries. If you give good service and make a lot of deliveries, you can ignore the occasional bad rating in 1-2 weeks because it will cycle out.

Doordash drivers: do not stress, do your best, safety comes first! However, providing excellent customer service is really important also because customers can leave tips at the end of the delivery. Tips are always on top of your base pay. Take a look at our guide to DoorDash tipping.

Here are some tips and tricks that can earn you a good rating and some cash tips.

How often do DoorDash Customers rate?

It is a mandatory step to rate the driver before the customer can place the next order.

If you are a Lyft driver or an Uber driver, you already know that at the end of each ride driver and passenger are prompted to rate each other. Dashers cannot rate the customers. However, if you have a problem during a delivery and you're worried about it affecting your rating, you can also email the Dasher support proactively.

How do I check my Doordash driver rating?

Checking your Doordash Driver Ratings is easy. Follow our step by step instructions:

If you are a Lyft driver or an Uber driver, you already know that at the end of each ride driver and passenger are prompted to rate each other. Dashers cannot rate the customers. However, if you have a problem during a delivery and you're worried about it affecting your rating, you can also contact the Dasher support proactively.

Why is My DoorDash Rating So Low?

If your rating dropped drastically, it can be explained by different factors:

How Do Postmates Driver Ratings Work

We believe that this helps you avoid being held responsible for circumstances outside of your control (for instance, if an item was prepared incorrectly). Instead, customers rate their delivery as a whole with a “thumbs up” or “thumbs down.” The customer’s choice will never affect you, your standing, or your ability to stay on the platform.

The Advantages of the new Postmates ratings for the drivers

Postmates is a driver friendly company. In a recent interview at CNN Business Bastian Lehmann - Postmates CEO said: Gig workers deserve a better deal than we have given them. The Gig companies don't have a long history of working with independente contractors, but for Postmates every gig worker deserves a voice and transparency from companies about pay and benefits.

The new rating system is for Postmates a first step that offers certainty and dignity for gig workers across America. While star ratings can push the user to make deeper considerations, from a driver’s viewpoint the biggest issue is the job insecurity.

A star rating customer review can be unfair and difficult to interpret. As Postmates drivers, we really appreciate the change. What Postmates has done is replaced one flawed system with another.

The new rating system is much easier than the previous one. For the customers, thumbs up means it was a positive experience, and if I could have a do-over, I would likely do it again. Thumbs down means it was a negative experience, and I wouldn’t do it again. For drivers, the new rating algorithm is an opportunity to continue to offer an excellent service without the fear of being deactivated, sometimes caused by an unfair review.

Growing businesses, improving offerings over time and prioritizing customer success are the priority for all rideshare and delivery companies. Uber, Lyft, Doordash and Instacart drivers have a consistent pressure to improve performance, be nice to customers, and abide by the rules so that they receive a high rating.

Here are answers to some common questions about the Postmates Ratings.

Feedback helps Postmates understand their clients' degree of delight or frustration, it will not affect in any case the Postmate driver or the driver pay. 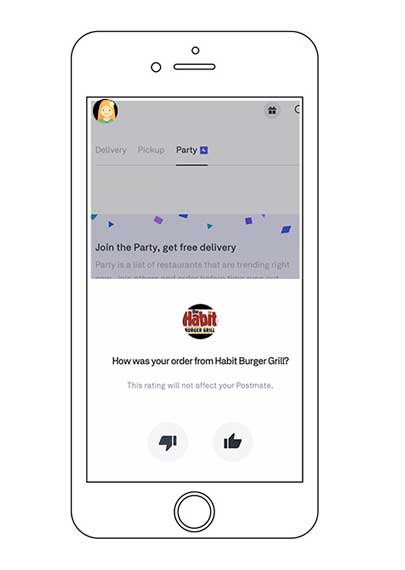 How Can I Improve my Postmates Driver Rating?

If one of the major concerns of rideshare drivers, like Lyft and Uber, and Doordash drivers is on how to get and maintain high ratings, it is not for Postmates drivers. Postmates has replaced the 5-star rating system with something better: 'thumbs up, thumbs down'. Postmates drivers no longer live in fear of low ratings.

What happens if you cancel a Postmates delivery?

Unlike Doordash drivers, for which deleted deliveries directly affect the ratings, for Postmates drivers this does not happen. Obviously, it is better to avoid accepting a delivery and then cancel it using the skip button or even better by going offline.

How to check my rating on Postmates?

Since Postmates does not use a ratings system, Postmates Fleet App does not provide a 'Ratings' menu.

In order to be a successful Postmates, Doordash driver, your goal should be to create a memorable and very positive experience for the customer. Postmates and Doordash have an in App tipping system, the customer can give you tips at the end of the delivery. We suggest you consult our guides to Postmates tipping and how to earn more driving with Postmates.

How do ratings work for Postmates?

Factors to consider before you sign up for Postmates or Doordash.

I hope this article gave you all some insight into how ratings work for Postmates and DoorDash. In this digital era where a lot of people are starting to make a living through gig jobs, it is important to understand all the details like the ratings. Unlike Doordash, Uber or Lyft drivers, Postmates Fleet drivers do not live in fear of low ratings from Postmates customers. If you choose to Sign up for DoorDash, we give you all the tips to provide a 5-star rating service.

Everything you need to know to become Uber Eats Delivery Driver

Postmates or DoorDash: Which is better for drivers?

How to set up and use Postmates Fleet App

How to Beconme a Wingz Driver

Do You Tip Your Postmates Driver

Set up your Fleet Driver Account and start to earn money